I’ve always liked beef jerky but felt it cost too much and contained too many fillers, additives, and preservatives. To be honest, I was never really interested in homemade beef jerky until I bought my food dehydrator. Included with the unit was sample jerky seasoning and cure packets, along with a recipe booklet.

The thing that caused me to take the plunge was during a recent shopping trip to the grocery store. The Sprouts meat section had been totally emptied except for several pounds of skirt steak and whole chickens. I happened to be on the phone with a friend who told me that the skirt steaks would make great beef jerky, so I scooped up several pounds of it.

I found out that the process of making jerky involves drying out raw meat that has been salted and marinated in seasonings. While beef jerky is the most popular, you can also make jerky from wild game, fish, and poultry. As a rule, the leanest meats make the best jerky.

Start with freshly-butchered and well-trimmed meat. Good options are:

As I mentioned, my Nesco dehydrator came with jerky spice and cure samples so I used that to make my marinade. Nesco also makes a jumbo kit that includes a “jerky gun” with three attachments for pushing out the meat in sticks or strips. But there are tons of beef jerky seasoning kits you can get if you’re not one to make your own marinades.

Remove all membranes, fat, and connective tissue from meat. Cut the meat into strips or squares. If you can have you butcher slice it for you at 1/4″ to 4/8″ thickness. If not, you can cut the meat as thin as possible and pound it thin with a meat mallet or rolling pin. 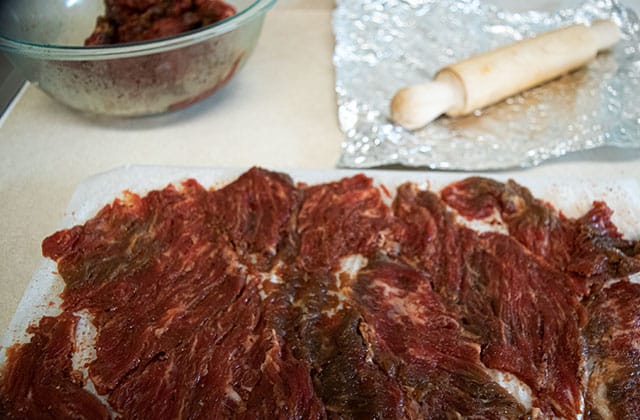 Before dehydrating, marinate your slices for 4-8 hours in the refrigerator. I marinated mine overnight.

Set temperature to 160℉ (71℃) which is the ideal temperature for drying meat. Depending on thickness, it should take 4-12 hours for your jerky to be ready. The time frame will depend on meat thickness, humidity, and how many trays you’ve loaded. 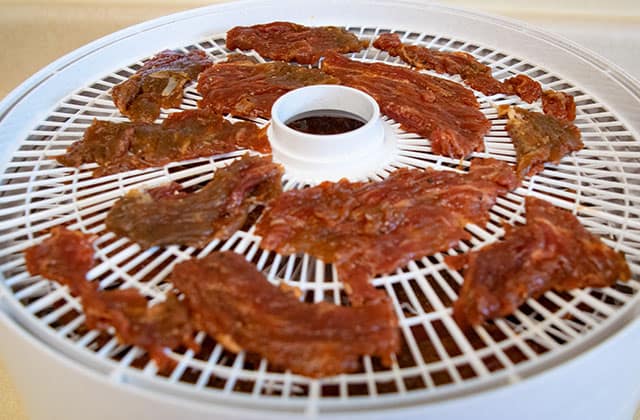 After about 4 hours check your meat. You will need to have some paper towels handy to gently pat away the oil that has accumulated on the surface. Re-start the drying process; checking for doneness. 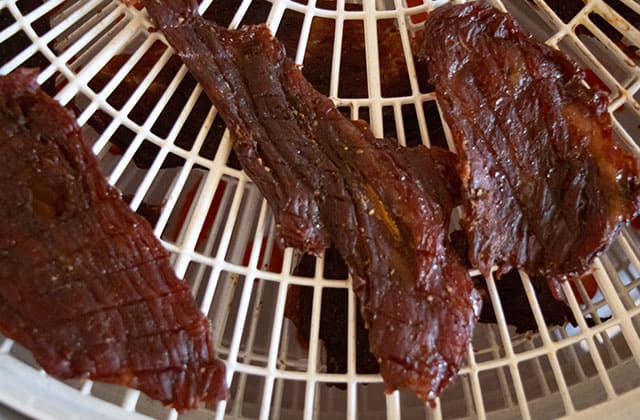 When you jerky has finished drying out, wrap it up in paper towels and set it aside for a few hours to cool. The paper towels will absorb most of the remaining oil before you package or vacuum seal it.

It takes about 3-4 weeks for un-refrigerated homemade beef jerky to turn rancid at room temperature. If you are vacuum sealing the jerky, it is very important to be sure it has been thouroughly dried out. It should last several months. If at any time you notice mold, throw it out immediately. The entire thing. Don’t take chances! 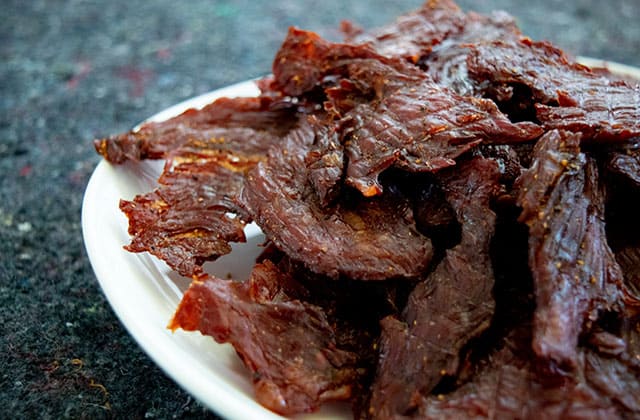 Here is a picture of my first batch of homemade beef jerky. It tasted great and the process was very non-threatening. I would venture to say almost anyone can make it.

In case you’re wondering, about 3 pounds of meat will yield about a pound of jerky. While marinating will add flavor, it also works to tenderize. So I recommend a 12-24 hour marinade timetable (if you can). You can also take the extra precaution of heating your freshly dried jerky in a 165℉ oven for a bout 30 minutes as a precaution against salmonella.

Oh, if you use your own meat marinade recipe, add a curing spice that includes salt and sodium nitrite to stop bacterial growth during the first drying stages.