How To Put Out A Grease Fire In The Kitchen 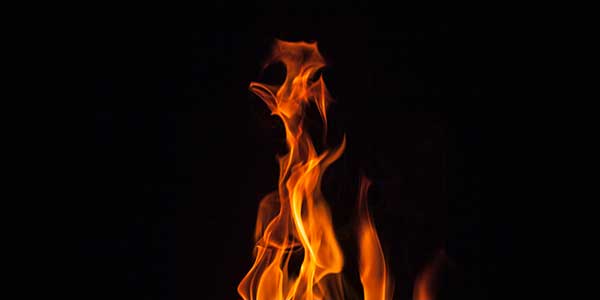 Half of all residential fires start in the kitchen. In most cases, cooking with grease and oil is the main cause. That’s why it is so important to know how to put out a grease fire.

Since most fires start in the kitchen, you should take the time now to develop a strategy to deal with the situation before it happens.

How Kitchen Grease Fires Start
Fryer Beware
Ignition Sources – What To Watch For
The Science Behind Cooking Fire Safety
How To Put Out A Grease Fire
What Not To Do When Fighting A Fire
Fire Extinguishers – Friend or Foe?
Be Proactive

According to the Federal Emergency Management Association (FEMA), 51.6% of residential fires in the United States in 2017 were cooking-related. Non-residential cooking fires accounted for 30.4%.

The number one cause of kitchen fires? Carelessness.

Being careless while cooking can take many forms. They include:

Photo by J Food via Creativemarket

Based on annual averages, the number one cause of home cooking fires is frying. Pan-frying, sauteing, and deep-frying leads to more fires than any other culinary method.

It’s not just the hot oil you have to worry about. Your cooking environment also plays a part. According to a report from the National Fire Protection Association (NFPA), about 66% of all cooking fires start with either food or other cooking materials catching fire.

The NFPA credits ranges and cooktops in at least 63% of fire instances where cooking is involved.

In most situations, frying is done on griddles, in pots, large pans, skillets, and deep fryers.

Gas or Electric Stove – Which is safer when cooking with oil?

Just because you’re not cooking with an open flame is no cause to relax.
It may surprise you to learn that it’s the electric cooktop and not the gas burner that is responsible for most grease fires in the kitchen.

By now you’re probably freaking out and vowing never to fry another thing in butter or oil again in your life. After all, you can use an air-fryer.

Precautions To Take When Frying With Grease

But when you have your next craving for some good old fashioned Southern fried chicken, here are some things you can do to avoid sparking a fire:

Ignition Sources – What to Watch For

We’ve already mentioned that electric or gas cooktops are the prime ignition sources in kitchen grease fires. But ovens (including microwave), griddles, and grills also fall into this category.

When grease from roasting or broiling ‘pools’ on cooking surfaces, it poses a major potential fire hazard. Caked on grease is a gift that keeps on giving.

Self-cleaning ovens can help make cleaning easier. But if your oven doesn’t have this feature, whip out the plastic gloves and the ‘green’ oven cleaner. Dirty stovetops and ovens are potential fire hazards when it comes to sparking kitchen grease fires.

Grilling is a fire hazard because of the animal fat that is rendered by the heat process.

Indoor electric fold-down grills collect food and old oils on the metal ‘ribs’ that make the grill marks. Make it a habit to clean them following each use.

Dirty outdoor grills are to blame for roughly 25% of grill-related fires. Caked on grease and old animal tissue can easily ignite.

When you light your grill using an open torch you’re putting yourself at risk. Gas grills cause 85% of most fires due to leaks or breaks in their seals. Charcoal is responsible for roughly 10% of these types of fires.

Although outdoor charcoal or butane grills don’t fall into the category of kitchen fires, they count as residential fires. If you live in an apartment or condo, you need to know that most of these types of fires start on an exterior balcony.

The Science Behind Cooking Fire Safety

One of the warning signs that things are about to ‘go south’ in the kitchen has to do with the smoke point of the oil. When oil begins to smoke, watch out for fire.

The smoke point is directly related to the degree to which a particular cooking oil has been refined.

The smoke point temperatures for 3 kinds of cooking are:

Almond, butter, avocado, corn, flaxseed, and peanut oils all have different smoke point temperatures. Oxidative stability (a chemical reaction involving oil and oxygen) is also a factor in determining how a particular oil will behave during the cooking process.

A flashpoint can be described as either combustible or flammable. A combustible element is anything that can be easily ignited and burned; either solid or liquid in form. The NFPA defines it as any liquid that has a flashpoint at or above 100 degrees Fahrenheit (37.8 Celsius).

The ignition point of cooking oil can be explained as a way of measuring how flammable or combustible something is. It accounts for almost 75% of all cooking fires.

For a substance to reach ignition, it doesn’t require an ignition source. The petroleum industry is well acquainted with oil ignition points and explains the term this way:

Put in simpler terms, the ignition point is the lowest temperature at which something will burn on its own.

The auto-ignition point of an oil is also called the kindling point. There are three main factors involved in establishing the time-frame for when this will occur:

In general, oils that are heated on electric burners will auto-ignite more quickly than on a gas stove. This is one of the reasons why cooking on an electric stove is more hazardous than on a gas stove. (See the research paper “Auto-Ignition of Cooking Oils” by University of Maryland student Krystyna Buda-Ortins, 2010)

How To Put Out A Grease Fire

Don’t panic. I know. It’s easier said than done. But, if you know what to do before a grease fire starts, you are likely to remain calm in an emergency.

Try to develop a cooking prep ritual that involves the following:

Do this if a grease fire erupts:

Part of your preparations should include making sure you have working smoke alarms in your home. As devastating and frightening as any fire can be, the toxic smoke is more lethal than the flames.

As is the case with fire extinguishers, take the time to understand the differences between the various smoke alarms on the market.

Most smoke detectors are sensitive to cooking smoke created by broiling, toasting, and frying. That’s why they should never be installed in the kitchen.

Cooking related ‘nuisance alarms’ account for 79% of all smoke detector nuisance alarms. Next Generation alarms will be able to discern between cooking and critical fire smoke.

Carbon monoxide detectors are life savers when it comes to sniffing out gas leaks from stoves.

What Not To Do When Fighting A Grease Fire

Never, ever pour water on a grease fire. Instead of cutting off the oxygen to the flame it has the opposite effect. It will sink to the bottom of the pan and evaporate. In the process, flaming oil will shoot everywhere.

Trying to move the pot off the burner to take it outside is also a bad idea. When you do this in a panicked state you fan the flames and risk spilling the hot on your skin and the floor.

When a grease fire erupts in the oven, keep the door closed and turn off the oven. The oxygen deprivation should extinguish the flames. Again, do not open the oven door.

Studies have shown, and many professional chefs agree that regular table salt works wonders in putting out grease fires. Some experts say baking soda also works. But they also warn you against using baking powder or other cooking ingredients like flour. Their chemical makeup is very different and will make matters worse.

According to the Houston Fire Department’s safety guidebook, the type of extinguisher should fit the type of fire you need to fight. These are categorized as types A, B, C, D, and K. ABC extinguishers are broad-spectrum and can address a variety of fire types.

Type K extinguishers are recommended for putting out grease fires in the kitchen. That’s because they are designed to be employed ONLY where cooking equipment involves the use of animal or vegetable oils (like butter, olive oil, etc.)

Don’t go cheap. Look for a seal from an independent testing firm like Underwriters Laboratories to ensure quality.

Be warned: residential use fire extinguishers are NOT designed to fight large fires. And you must know what you’re doing, especially in an emergency.

When you’re in a panic, you can’t think. If you haven’t been trained in how to use a fire extinguisher, it can become your biggest nightmare (as you saw in the previous video).

It’s a good idea to contact your local fire department to find out about classes available to train you in the proper use of extinguishers. In the meantime, remember the P.A.S.S. acronym:

P. — Pull the pin
A. — Aim the nozzle at the base of the fire
S. — Squeeze the handle
S. — Sweep the nozzle back-and-forth How To Be Proactive

Most importantly, know your limits. If you reach a point where the fire is beyond your ability to fight it, call 9-1-1 and get everyone out of the house.

We are people who love to cook. Being prepared is the key to handling the situation when a grease fire erupts while cooking. When you know how to put out a grease fire before it happens, the odds are in your favor that the situation will be resolved in the best possible way.